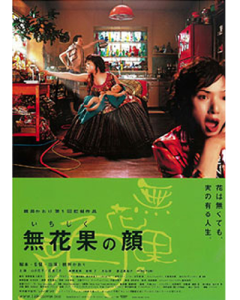 When ‘Faces of a Fig Tree’ debuted at The Berlin International Film Festival, it both surprised and exasperated critics. Based on a collection of vignettes written by Momoi herself, the film’s brash cinematography, kaleidoscopic sets, and cast of quirky characters seemed to overwhelm the story, itself, some thought.  Still, the film won the festival’s prestigious NETPAC Award for best Asian film and soon after received invitations to over 10 additional festivals.

As ‘Faces of a Fig Tree’ toured, it increasingly won over its audiences and critics, garnering several awards in competition- culminating with Momoi winning both best director and best actress honors in Russia’s esteemed Vladivostok International Film Festival.

Although Momoi had previously helmed the short film ‘Aura’ and  over ten other works where she chose to remain anonymous, Momoi’s feature-length directorial debut is a refreshing departure from traditional film, which bears rich fruit for lovers of the avant-garde.

Momoi most recently directed and starred in the film ‘Hee’ which debuted at the 2016 Berlin Film Festival in the Forum Section for experimental works.